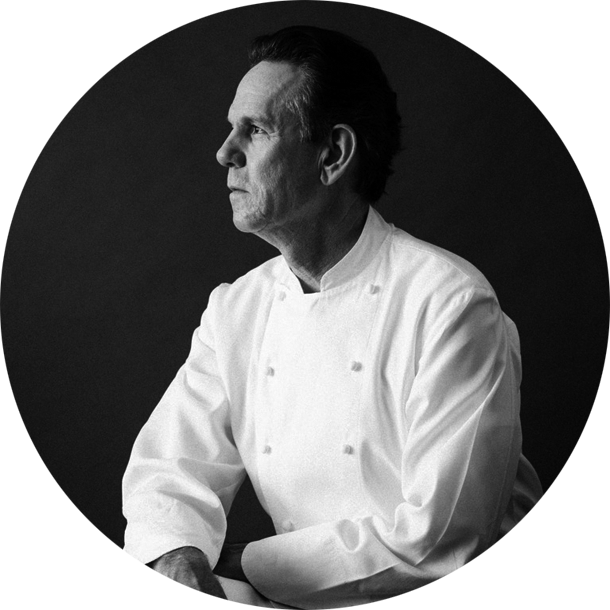 I first picked up The French Laundry cookbook in 2001. The book didn´t just inspire me, it blew my mind, the precision, skill, stories and philosophy, I set an intention that I would someday work in this restaurant, somehow I will make this happen! It took me 8 years! It fuelled my determination, drive and motivation for this formative phase of my career. It gave me focus and something to work towards. It brought out the best in me and gave me the ability to tap into some inner strength that I would not otherwise have discovered.

I sent several letters to The French Laundry and never heard back. They receive thousands of letters from aspiring cooks. I had to try something else. Where there is a will, there is a way; some empowering words my parents instilled in me from a young age. To get my foot in the famous blue door of The French Laundry, it took recommendation letters from Michael Caines, Gordon Ramsay and ex-French Laundry cook Ross Melling, whom I would work with on my days off, to gain an insight into what it was like working in The French Laundry and also to get another positive recommendation. The French Laundry is hesitant in recruiting Europeans because the only training visa available is for an 18 month period only. They invest a massive amount of time and resources into training their cooks, so they rightly expect them to stay for 3-5 years. Only one other European was working at The French Laundry when I was there and he was the grandson of the Troisgros legacy, the longest holders of 3 Michelin stars in France and the world, so It was a big feat just to get my foot in the door for an interview!

Late 2008, after some intensive immersions in Gordon Ramsay’s Michelin star restaurants, I ventured out to Napa Valley, California, for a 1 week working interview at The French Laundry. I fell in love with the place. Entering The French Laundry kitchen made my skin crawl with excitement. I was living the dream I had envisaged. This kitchen was so cool, calm and organised. The communication and professionalism was far superior to anything I had ever experienced. The French Laundry had their own language and ‘dance’, something only those that work there can ever truly relate to.

On day 5 of my working interview, the sous chef Tony Secviar handed me a plate with two lobster tails, a duck breast and two eggs. He briefed me on the challenge and wished me luck. I had two hours to produce a three course meal for Thomas Keller and Corey Lee. I could use any vegetables or raw ingredients that I would need for my career defining ‘cook-off ’. Here we go, I was in my element. Mystery baskets were my forte from the five years of Gordon Ramsay scholarship surprises! I had been watching all the chefs like a hawk over the previous four days, my plan was to emulate The French Laundry style. I hustled for the next 2 hours and cooked from my heart, my position at The French Laundry was pinning on it. Serving Thomas Keller and Cory Lee a three course meal on the pass at The French Laundry is another very special and proud time moment in my life. I nailed the brief and was offered a chef-de-partie position. The dream was becoming a reality. I was ecstatic.

This is another of Thomas Keller’s famous sayings which I can attest to. Training at The French Laundry was like training at an elite cookery school, the 9 course tasting menu changed every day, lunch and dinner. This was mind boggling for me, coming from an environment where it changed only 4 times per year. Daily changing menu means collaboration, communication and organisation beyond anything I had ever imagined. Every single step and breath you take at The French Laundry is calculated and executed with intention. It challenged me to my core every single day. The physical and mental intensity was profound. I experienced such an incredible feeling of pride and honor cooking at The French Laundry and being apart of their legacy and family. Although it was by far the most demanding position I had been in, it was also the most rewarding. I developed many strengths from surviving and thriving in this elite world class environment.

“When you acknowledge, as you must, that there is no such thing as perfect food, only the idea of it, then the real purpose of striving toward perfection becomes clear: to make people happy, that is what cooking is all about.”

Throughout The French Laundry’s kitchen, Thomas has many positive and motivational quotes sketched onto plaques. ‘Sense of urgency’ ‘Attention to detail ... every aspect’ ‘What would you attempt to do if you knew you could not fail?” are but a few. The creative, open, professional and supportive culture of The French Laundry is what makes it so unique. They attract the best team members, who are always training for their next position. ‘To remain static is to lose ground’ is another mantra. The best ingredients and produce come through the kitchen doors; there was a team of gardeners who would give the cooks a days notice of what has been harvested so they could incorporate these ingredients onto the menu the next day. Most of the vegetables would go from earth to plate in under 24 hours.

Sister restaurant Perse in New York, 3,000 miles away is connected via video conferencing for continued collaboration.

I trained for 1 month in the commis kitchen for my initiation period. I was then put on the meat station for the remainder of my time. It took 3 months of 1:1 training before I could hold my own on the meat section, deemed the toughest section at The French Laundry... when you get hit ... my oh my, you get hit. Having one tasting menu was in no way a straightforward affair. All French Laundry alumni will agree, it never gets easy. As well as the 9 course daily tasting menu, we ran a 9 course vegetable tasting, mini VIP, VIP and super VIP menus, private dining rooms menu and ‘out of place’ dishes. It was always the ‘out of place’ dishes that caught cooks off guard! These were dishes that were created daily, each station was expected to have several ‘out of place’ dishes ready for discerning guests who may not like something on the menu or have an allergy. These bespoke dishes were the responsibility of the chef-de-partie. One of the rules was that no single ingredient repetition can take place throughout the entire meal. A 70 cover service, consisting of two sittings started at 5pm and went on until about midnight. that is a long service where you need to be on 100% peak performance at all times, one mistake can upset the entire symbiotically orchestrated ‘dance’ of The French Laundry.

Each day at The French Laundry provided many new challenges, lessons and experiences. I made many new friends during my time there and got to explore much of California’s exciting lifestyle, from Lake Tahoe’s breathtaking mountains to Santa Cruz's cool surfing lifestyle.

All good things must come to an end. It was a sad time waving goodby to The French Laundry when my visa expired. I had lived and breathed the dream, I made it a reality. Looking back now, it still feels like a dream, sometimes I need to pinch myself and ask did it really happen? Oh yes, it did and I did not just survive, I thrived. I gave it my absolute best every day. There were many days I did not think I was going to make it, I felt sick with fear, worry and stress on countless occasions. Lots of blood, sweat and tears were shed. Fortunately friends and mentors were always there for encouragement and support.

I was instilled with some culinary powers from my time at The French Laundry, cooks who trained there will agree, we gain a broader perspective, we think and work differently, we become more accountable, more creative and work with more ease, grace and efficiency. The French Laundry is well and truly one of the greatest restaurants of all time, and has inspired a generation of talented chefs around the world.

Dream big, work hard and everything is possible