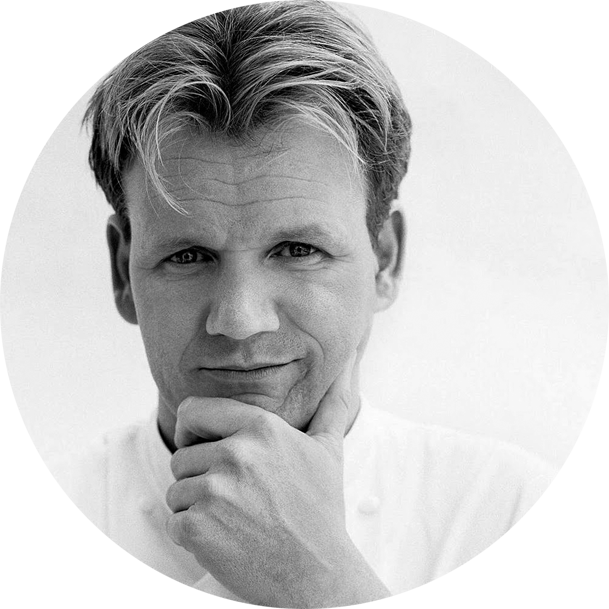 I FIRST ENTERED THE GORDON RAMSAY SCHOLARSHIP IN 2002. IT WAS A COMPETITION OPEN TO ASPIRING CHEFS UNDER THE AGE OF 25 WORKING IN THE UK AND IRELAND. A SERIES OF SEMI-FINAL COOK-OFFS TOOK PLACE AROUND THE COUNTRY, CUMULATING IN THE GRAND FINAL AT THE NEC, BIRMINGHAM, AS PART OF A LIVE SHOW. A MYSTERY BASKET OF SEASONAL INGREDIENTS WAS PRESENTED TO THE COMPETITORS 30 MINUTES BEFORE GOING LIVE ON STAGE. WE THEN HAD THREE HOURS TO PREPARE, COOK AND SERVE THREE COURSES, TO BE JUDGED AND DELIBERATED ON BY GORDON AND HIS HEAD CHEFS: ANGELA HARTNETT, MARCUS WAREING, JASON ATHERTON, MARK ASKEW AND MARK SARGENT, AS WELL AS SOME SURPRISE GUEST JUDGES SUCH AS HESTON BLUMENTHAL.

It took me five years of determination and perseverance to win this competition.

I failed four years on the trot, and I failed badly some years! I was openminded, hungry to learn and progress in my craft, so I took every nugget of invaluable feedback and advice onboard from the judges year after year. Positive feedback is encouraging, it motivated me to try even harder, but the constructive detailed feedback from the judges on where to improve was priceless. After each failed attempt, I went back to my job at Gidleigh Park even more enthusiastic and determined than before, being aware of more weak areas I wanted to develop. Acknowledging, accepting and developing my weak points made me a stronger chef. My weak points became my strengths.

2007 was going to be my year, I knew it. I visualised and believed it. I had worked extremely hard and considered every aspect of my performance and the competition pitfalls. I was focused, determined, hungry and on the best form ever. Going for gold was all I had in sight. The three hours cooking live on stage for the Gordon Ramsay Scholarship final was one of the most memorable experiences of my career. Buzzing with adrenaline, I knew the winning dishes were within my grasp, all I had to do was execute the 3 courses with grace, ease, conviction and precision. I remained 100% focused and executed without fault, everything was presented precisely how I envisaged.

After all the judging and deliberating was completed backstage by Gordon and his team, it was time for the winner to be announced. I stood on stage trem - bling with all the other competitors in front of thousands of people, tv cameras, photographers, friends and family. Gordon´s presence onstage was electric, his trademark wit and humor along with his positive evaluation of all competitors effort and determination was a tribute. Gordon called out 3rd place, 2nd place ... that was it, i knew it, I had done it. Gordon went on to commend the winner and listed out all the exceptional traits and skills that were noted by him and the judges.

Gordon called my name out as the winner, for what was one of the proudest and most exhilarating moments of my life. The champion, after five years of perseverance and graft.

The following year I was mentored by Gordon and his head chefs at his restaurants in London, Paris and New York. This coincided with the interlude period between me moving from Gidleigh Park to The French Laundry.

My biggest lesson from competing in the Gordon Ramsay Scholarship was: ‘perseverance’. If you want something, go and work for it... Pay the price now and reap the benefits further down the line. Everything is possible if you believe in yourself. Never ever give up no matter what....