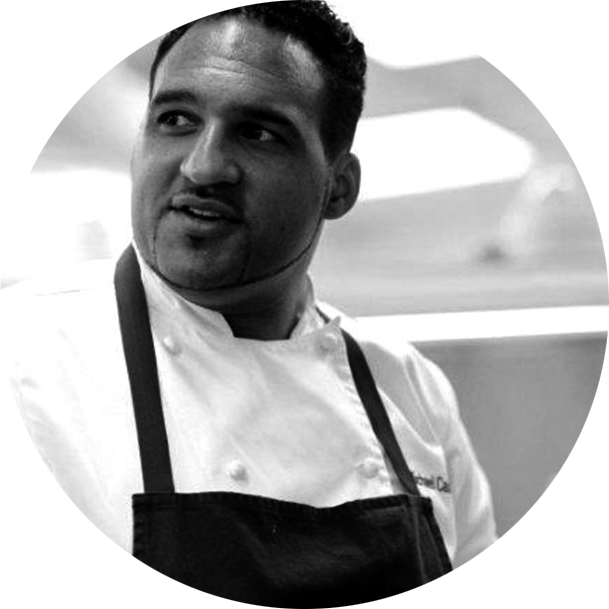 MICHAEL CAINES IS ONE OF BRITAIN’S MOST ACCLAIMED CHEFS. AT GIDLEIGH PARK, WHERE HE WAS AT THE HELM FOR 21 YEARS, HE EARNED AND HELD TWO MICHELIN STARS SERVING DISTINCTIVE MODERN EUROPEAN CUISINE UTILISING THE FINEST LOCAL AND REGIONAL PRODUCE AND INGREDIENTS. MICHAEL LEARNT HIS CRAFT FROM THE LEGENDS OF FRENCH GASTRONOMY, BERNARD LOISEAU, JOEL ROBUCHON AND RAYMOND BLANC.

I was 19 years old when i first met Michael. I called into the Royal Clarence, Exeter, on my day off to see if I could get some unpaid work experience, having just moved to the south west of England and having heard so much positive talk of Gidleigh Park. Michael was extremely supportive and welcomed me to the Royal Clarence and Gidleigh Park. My work experience at Gidleigh Park marked the starting point for me in working at elite restaurants. At that time Gidleigh Park was ranked in the top 10 restaurants in the UK. Premiere League here I come!

I embarked on a pilgrimage to the stunningly beautiful and picturesque Gidleigh Park, nestled in the midst of remote and tranquil Dartmoor in Devon. The standard of food and professionalism of the team was something I had never encountered before. I was captivated and inspired. Michael gave me lots of dishes to taste, I was blown away by his passion, excitement and wizardry on the pass, and all with one arm. Michael had tragically lost his right arm in a car accident a few years previous. What really struck me was the self belief and determination this man possessed, as well as the loyalty and respect from his uber-talented and hardworking brigade.

The culture was “work hard, support each other and be the best you can – and everything is possible”. One team, one dream ... ‘Let´s go, chef, push yourself ’

I went on to spend three formative years honing my skills with Michael at Gidleigh Park, working my way up from a commis chef to sous chef. Michael always brought the best out in everyone and offered great career progression and opportunities. The journey was challenging, to say the least, to meet the exceptional standards day after day.

It was survival of the fittest, countless chefs walked out and did the infamous ‘midnight runner’, many just could not cut the mustard at this level of intensity day in, day out. It takes a certain single minded determination to rise up through the ranks. I hung on and battled all the way, never giving up. Michael and the team were always there for support and encouragement. Everyone went through different stages of personal challenges to maintain momentum. Nothing a few beers down in Chagford after service couldn´t sort out! Many of the Gidleigh Park original brigade I was a part of are now executive chefs, restaurant owners and Michelin star winners all over the world. Michael breeds winners and has mentored a generation of super talented chefs. I developed many skills and qualities at Gidleigh Park: teamwork, commitment, support, communication, multi-tasking, honesty and accountability were all part and parcel of the role, as well as learning cooking techniques and classic Michelin star dishes that were rooted in the finest of French gastronomy. My three years of hard graft was not in vain, I have gained many culinary superpowers which will last a lifetime.

Work to learn, not to earn: knowledge is power.

Gidleigh Park was my stepping stone to The French Laundry. When the time came to move on and spread my wings, Michael wrote a letter of recommendation to Thomas Keller. Napa Valley, California was to be my next chapter and adventure. Everything I had learnt at Gidleigh gave me the confidence, strength, agility and endurance to hold my own on the stoves in the world's number 1 restaurant.

‘NEVER GO INTO BATTLE WITHOUT ANY AMMUNITION’’