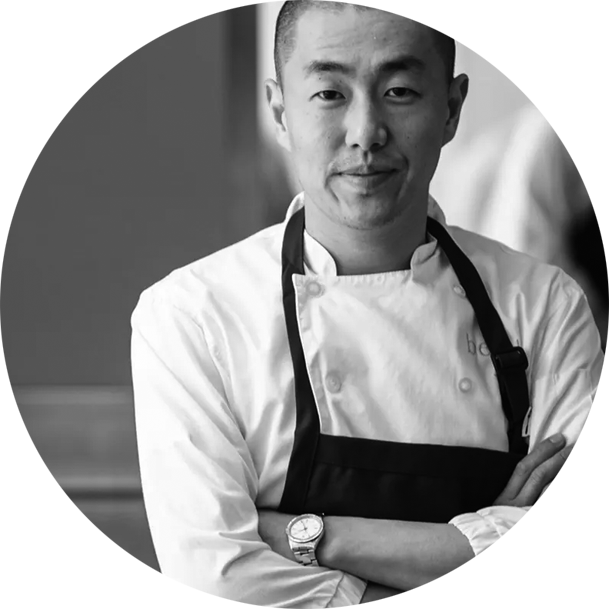 COREY LEE BENU WAS MY CHEF-DE-CUISINE WHEN I TRAINED AT THE FRENCH LAUNDRY. HE WAS THE MOST DEMANDING AND CHALLENGING CHEF I HAVE TRAINED WITH, BUT HE WAS ALSO PROBABLY THE BEST CHEF I HAVE BEEN FORTUNATE ENOUGH TO BE MENTORED BY. COREY HAS A UNIQUE IN-DEPTH KNOWLEDGE OF ASIAN AND EUROPEAN CUISINES, ALONG WITH A MIX OF CLASSIC AND MODERN TECHNIQUES.

Corey Lee is a master of his craft and is highly regarded as one of the best chefs in the world by his peers.

Corey has a unique way in bringing out the best in who he mentors. He knows what you are going to do about 7 steps before you have even thought about it. He has the eye of the tiger and can spot if something is not right, even when he is facing the other way. He is aware of your weak points and capabilities. Cory´s approach is firm but fair. There was always time for a detailed analysis of the lesson and an encouraging few words with a pat on the back.

Service time at The French Laundry with Corey at the helm was never a dull affair. He commanded respect from everyone. It was always showtime, never ever was there a compromise made, striving for the utmost excellence in every way was part and parcel. I took many a grilling during service for mistakes I would make, bouncing back and maintaining momentum and composure after these grillings was a true test of strength, stamina and character. You had to take them on the chin, dust yourself off and get on with cooking.

The greater the intensity of the grilling a chef gets, the quicker the lesson is learnt. Just don’t take it personally!

At the time it’s tough to see it that way, with hindsight, I am very grateful for every single grilling I got throughout my career! Each one provided a valuable lesson and an opportunity to grow stronger. Michelin star cooking is a physically and mentally tough, demanding environment, unlike no other industry. In the heat of service, the pressure is on. There is a lot at stake in the world’s best restaurant if the ship starts to sink. It’s not a matter of life or death ... it’s even more important than that!

After 10 solid years with Thomas Keller, Corey departed The French Laundry to start his own restaurant, Benu, in San Francisco. Just 4 years later Corey and his team were awarded the coveted, almost unobtainable super elite status of 3 Michelin stars. Climbing to this level in such a short space of time is testament to Corey´s tenacity, sheer hard work and talent. Corey is mentoring and inspiring a generation of chefs in the USA.